Daniel Draper discusses his portrait of the past, present and future of The Durham Miners' Gala.

Think of trade unionism in the North of England and what comes to mind: images of back-breaking labour from the region’s industrial heyday? Political clashes against the Thatcherite government? Brutal battles with the authorities in the fractious period from the early-70s to the mid-80s? Work, politics and direct action – not, perhaps, a party. But for contemporary trade unionism an annual celebration - a big, raucous one at that - is a vital moment for a movement much changed since those days of boom and bust.

Every second Saturday in July, the city of Durham is taken over by The Durham Miners' Gala. Its streets are marched on by trade unionists and activists, the genteel quiet of its historic old town is disturbed by the sound of brass, chants and speeches. The gathering, a key bulwark of working class culture and politics in the UK, is the subject of a new documentary that takes its title from the Gala’s affectionate nickname among locals: The Big Meeting. Produced by the team behind Nature of the Beast, a profile of veteran Labour MP Dennis Skinner, the film sees director Daniel Draper on familiar political ground but in an environment far removed from the storied chambers of Westminster where his previous subject made his name. What drew him to this unconventional story of British trade unionism? “I hadn’t experienced anything like it before. My first trip was back in 2016 when we were filming for our first documentary and I was overcome by the noise, colour and culture on show. It’s beyond words.”

The Big Meeting recreates that sense of being overcome, of the noisy, varicoloured chaos of the day, by adopting a multi-layered approach to documenting the event. Draper’s filmmaking teams criss-cross the city, picking out a host of key characters at various points on their journeys through its crowded streets. Their stories jostle for attention amongst the festivities and each other, with multiple narratives often playing out simultaneously in split-screen.

The range of faces we meet and the various strands that unfold are part of Draper’s strategy “to show the Gala through narratives that represent the past, present and future of the event.” We witness the past through the recollections of those involved in mining communities, the illustrated banners that speckle the day's parade and a host of clips drawn from the collections of the North East Film Archive – “they have some amazing footage of Galas gone by" – as well as moments from John Irwin’s 1963 Free Cinema work, Gala Day.

These images of mining’s sometimes glorious past bring to light an interesting tension with its more contested status in the present – a juxtaposition inevitably coloured by the industry’s decline and the transformation of coalfield regions since the pit closures. A voice from the past – Richard Burton’s no less – speaks of the pride of the miners; men viewed as "aristocrats of the working class... kings of the underworld." While a dissenting note is sounded in the present by journalist Paul Mason who recalls "the dirt and filth and darkness" endured by his father and grandfather. Why was exploring this contrast important in The Big Meeting? “This came from a conversation with Dennis Skinner before a screening of Nature of the Beast. He thought I had romanticised mining in the film. In hindsight, he was right."

Making The Big Meeting helped me understand that I had an appreciation for the culture that miners created rather than the work they did. We made a conscious decision to show how mining was really an awful job - dangerous and exploitative - but that what those communities created was at times beautiful.

For Draper, the legacy of these communities finds expression in new ways at today’s Galas. The Big Meeting deliberately foregrounds such stories: choosing to highlight acts of contemporary political activism inspired by the unions' earlier efforts, but no longer focused on preserving the mining way of life. The first character we meet is Charlotte, a young woman working at a radical bookstall, and our experience of the gala is regularly framed from her perspective. Further contributions come from the members of a new Women’s Banner Group, LGBT activists and young people whose experiences are not of the coalface, but of low-paid, unstable retail contracts. Draper notes: “It made sense to make them the protagonists as they symbolise what’s exciting about the future of the Gala. There’s no denying that mining culture is male dominated, but with there being no pits in the area anymore and the Gala thriving in recent years, it’s allowed for different narratives to come to the fore.”

The Big Meeting is currently screening across the North and beyond. Draper has attended many of the events, while others have featured local politicians and union representatives. It’s part of an approach where both the film and the context in which it’s presented reflect the Gala’s spirit of grassroots collaboration. “The screenings we’ve had in former mining communities have been very positive, which is a massive relief. It serves as some sort of justification for making the film - there hadn’t been a feature-length film about the Gala, and now there is. It’s there for those communities to use as a tool for debate and discussion.”

The Big Meeting is available for theatrical and non-theatrical bookings via Miracle Communications. More information on the film and booking details can be found on our Forum. 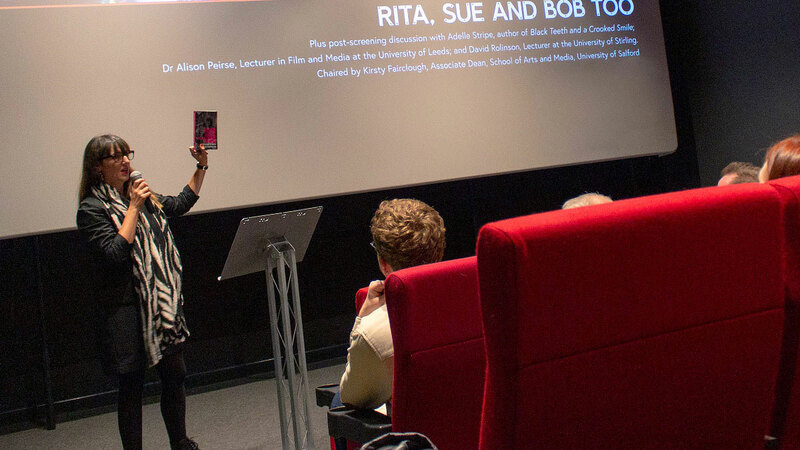